In some countries gambling is banned by law, while in some of them, like the US and the UK, it is still easily accessible for all social groups, including soldiers.

According to the US GAO (Government Accountability Office) report, the DOD (Department of Defence) has no clear guidance addressing gambling disorders, as it does with other mental affections. 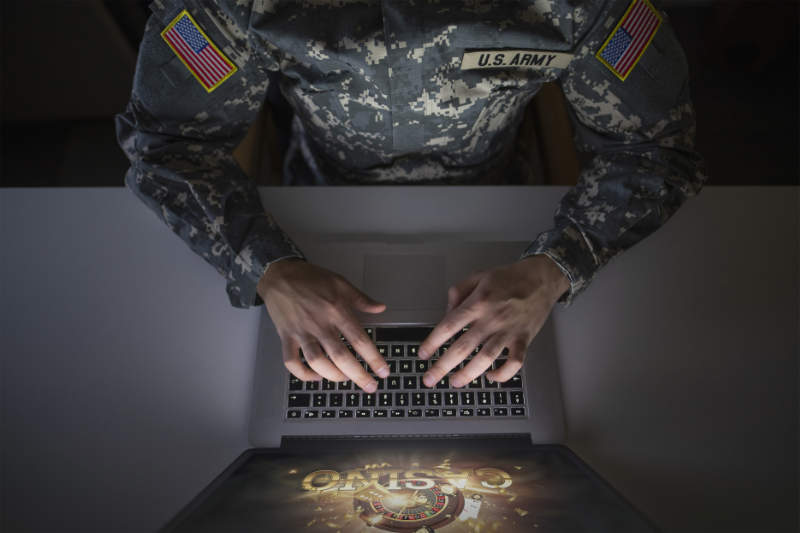 In 2015, reposing on historic evidence of gambling in the US military and after the revelation that the DOD operates 3,000 slot machines at the US military bases, Senator Elizabeth Warren requested the GAO report. In particular, it turned out that the Navy keeps slot machines in their bases in Greece, Diego Garcia, Korea, Italy, Singapore, and Spain, while the US Army has them in bases in Germany and Japan, and their annual revenues were estimated at $100 million per year.

In its findings, GAO confirms that DOD is focused on mental health disorders, excluding gambling disorder from the list, for the reason that it is not a frequently diagnosed condition that entails a risk to individual readiness, not to the overall readiness.

There have been suggestions in society that gambling should be banned within the military. It can become a problem for all people involved in military service. The main argument is gambling addiction - active soldiers and veterans can become reliant on gambling. Leaving retired veterans out of the equation, between 36 000 and 48 000 military personnel in the US suffer from a gambling disorder.

Back to the GAO report, according to the DOD data - less than 0.03 percent of the average number of military personnel are diagnosed with gambling disorder annually. But these numbers do not include retired personnel and ignore the fact that the smaller part of those who suffer seek treatment. After military service, some individuals struggle to cope with the civilian life, and gambling becomes the thing that makes up for the lack of adrenaline.

Responding to the GAO report, the DOD said that there is no need for gambling disorder screening. But it is ready to promote the gambling awareness program among military personnel.

As of today, gambling by military personnel in the US makes up to $150 million per year. So it is the most obvious argument for allowing gambling on military bases in the face of all negative consequences of gambling. The only thing organized by the government that can help veterans and people who currently serve to manage gambling addiction are some organizations like the UK Royal British Legion.

The most reasonable way to save the companies' income and the mental health of the troops is to play online casino games. You're gonna be alright playing an online casino just for fun. Playing online has some obvious advantages - soldiers can relax and get some fun at any time of the day or night, reliable online platforms always care about their customers, plus online gaming develops cognitive abilities.